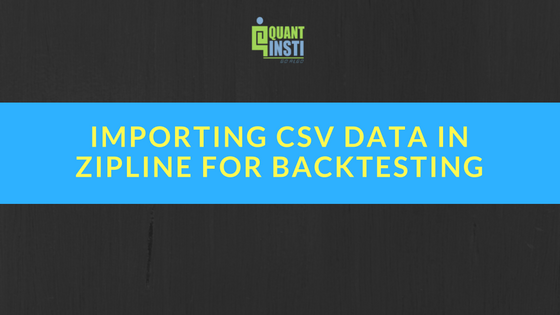 In our previous article on introduction to Zipline package in Python, we created an algorithm for moving crossover strategy. Recall, Zipline is a Python library for trading applications and is used to create an event-driven system that can support both backtesting and live trading.

In the previous article, we also learned how to implement Moving Average Crossover strategy on Zipline. The strategy code in Zipline reads data from Yahoo directly, performs the backtest and plots the results. We recommend that you brush up a few essential concepts, covered in the previous post, before going further:

In this article, we will take a step further and learn to backtest on Zipline using data from different sources. We will learn to:

The post serves as a guide for serious quants and DIY Algo traders who want to make use of Python or Zipline packages independently for backtesting and hypothesis testing of their trading ideas. In this post, we will assume that the data is from the US markets. It is possible to use other markets’ data sets for analysis with some edits and additions in the code. We will share the same in a later post. 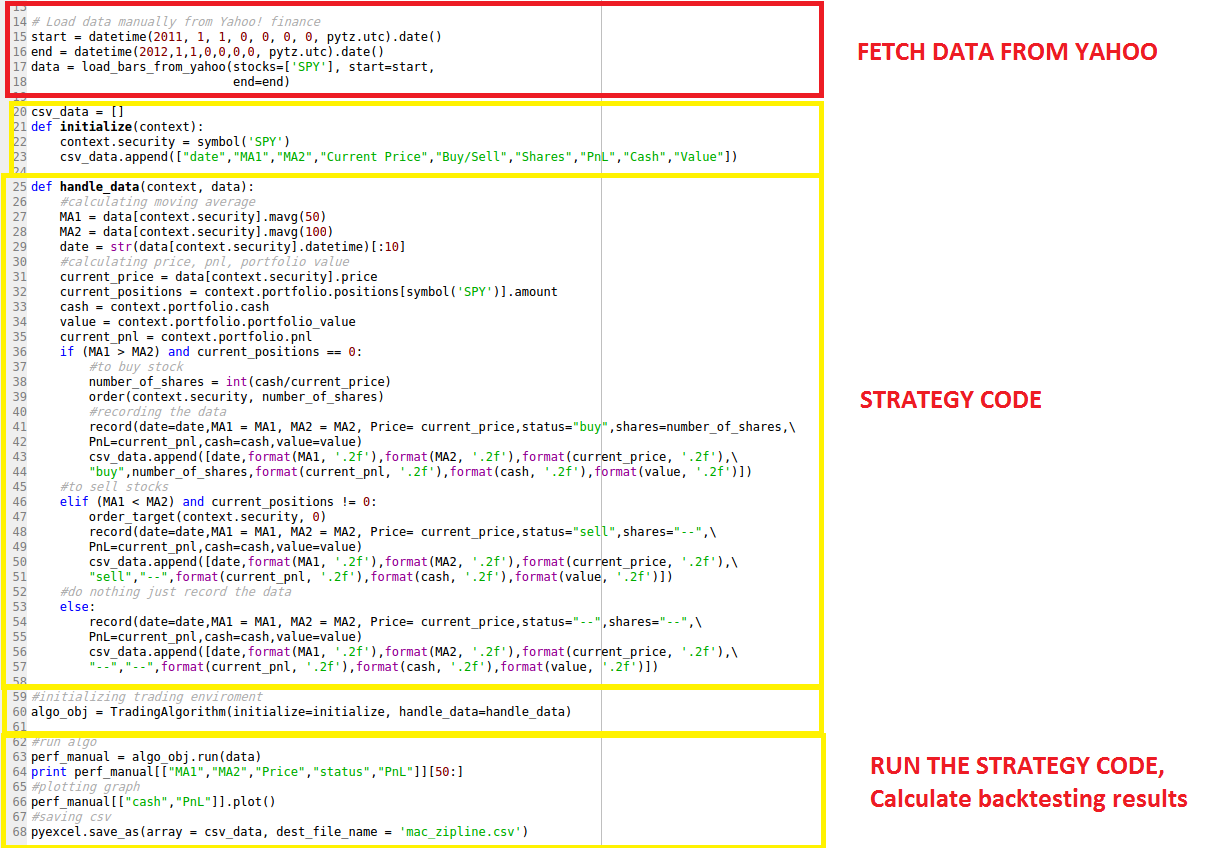 The problem with the existing method?

Zipline provides an inbuilt function “loadsbarsfrom_yahoo()” that fetches data from Yahoo in given range and uses that data for all the calculations. Though very easy to use, this function only works with Yahoo data. Using this function, we cannot backtest on different data sets such as

We have been using this inbuilt function so far to load stock data in Python IDE and work further with it. To be able to read csv or any other data type in Zipline, we need to understand how Zipline works and why usual methods to import data do not work here!

Zipline accepts the data in panel form. To understand how Zipline treats and understands data, we must learn a little bit about data structures in Python.

It is a one-dimensional labeled array capable of holding any data type (integers, strings, floating point numbers, Python objects, etc.). The axis labels are collectively referred to as the index.

The basic method to create a Series is to call:

A series accepts different kinds of objects such as a Python dictionary, ndarray, a scalar value (like 5).

It is a two-dimensional labeled data structure with rows and columns. Columns can be of different types or same.

It is one of the most commonly used pandas objects and accepts different types of inputs such as Dict of 1D ndarrays, lists, dicts, or Series; 2-D numpy.ndarray; Structured or record ndarray; a Series.

A Panel is a lesser used data structure but can be efficiently used for three-dimensional data.

The three axes are named as below:

Zipline only understands data structure in the Panel format.

While it is easy to import .csv data in Panda as a dataframe, it is not possible to do the same in Zipline directly. However, we have found a roundabout to this problem:

This is a powerful technique which will help you in importing data from different sources such as:

Let us get started with the three steps!

Use DataReader to read data from Google

Pandas provide a function Datareader which allows the user to specify the date range and the source.  You can use Yahoo, Google or any other data source.

This is how a DataFrame looks like when you print the first 6 rows:

Use read_csv function to import a CSV file

Pandas provide another function read_csv that fetches the csv file from a specified location. Please note that the CSV should be in a proper format so that it runs in a correct fashion when called by a strategy algorithm in Zipline.

Note in the code above:

Name of the stock is “SPY” We are already in the directory where the CSV file “SPY.csv” is saved, else you need to specify the path as well.

The data imported in Python IDE by aforementioned methods is saved as a Dataframe. Now we need to convert it into Panel format and modify major and minor axis.

Zipline accepts ['Open', 'High', 'Low', 'Close', 'Volume'] data as minor axis and ‘Date’ as major axis in UTC time format. Since if we did not have the Date in UTC format, we convert it by using “tz_localize(pytz.utc)”.

Now ‘panel’ is the dataset ‘data’ saved in the panel format. This is how a Panel format looks like:

That’s it! Now you can easily run the previously explained Moving Crossover strategy on a CSV data file! Go on, give it a try!

You can fetch the Quandl(US data) data, and try generating signals on the same.

In the previous post, we backtested a simple Moving Crossover strategy and plotted cash and PnL for each trading day. Now, we will calculate PnL and the total number of trades for the entire trading period.

Recall that the results are automatically saved in ‘perf_manual’. Using the same, we can calculate any performance ratios or numbers that we need. 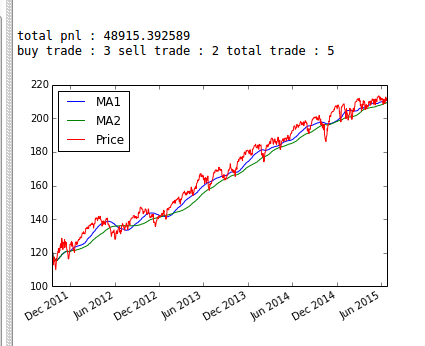 Looks like this strategy lost more than 50% of initial capital!

Go through the official documentation of TradingAlgorithm() function to try and learn more!

Read our next post that will introduce you to zipline package in python with its benefits, how to install it, and using it code the moving crossover strategy for financial trade. Click here to read now.

Introduction To Zipline In Python