Python has emerged as one of the most popular languages for programmers in financial trading, due to its ease of availability, user-friendliness, and the presence of sufficient scientific libraries like Pandas, NumPy, PyAlgoTrade, Pybacktest and more.

Python serves as an excellent choice for automated trading when the trading frequency is low/medium, i.e. for trades which do not last less than a few seconds. It has multiple APIs/Libraries that can be linked to make it optimal, cheaper and allow greater exploratory development of multiple trade ideas.

It is due to these reasons that Python has a very interactive online community of users, who share, reshare, and critically review each other’s work or codes. One of the most popular web-based backtesting systems is QuantConnect.

QuantConnect utilises C# and Python. It boasts of providing a wealth of historical data. QuantConnect has supported live trading with Interactive Brokers since 2015.

Zipline is a Python library for trading applications. It is an event-driven system that supports both backtesting and live trading.

In this article, we will learn how to install Zipline and then how to implement Moving Average Crossover strategy and calculate P&L, Portfolio value etc.

This article is divided into the following four sections:

Assuming you have all required non-Python dependencies, you can install Zipline in Python with pip via:

Another way to install Zipline in Python is via the conda package manager, which comes as part of Anaconda or can be installed via pip install conda.

Once conda has been set up you can install Zipline from the conda-forge channel:

Zipline in Python provides a particular structure to the code which includes defining few functions that run the algorithms over a dataset as mentioned below.

So, first we have to import some functions we would need in the code. Every Zipline algorithm consists of two functions you have to define:

Before the start of the algorithm, Zipline calls the initialize() function and passes in a context variable. Context is a global variable that allows you to store variables you need to access from one algorithm iteration to the next.

After the algorithm has been initialized, Zipline calls the handle_data() function once for each event. At every call, it passes the same context variable and an event frame called data containing the current trading bar with open, high, low, and close (OHLC) prices as well as volume for each stock.

All functions commonly used in the algorithm can be found in Zipline.api module. Here we are using order(arg1, arg2) that takes two arguments: a security object, and a number specifying how many stocks you would like to order (if negative, order() will sell/short stocks). In this case, we want to order 10 shares of Apple at each iteration.

Now, the second method record() allows you to save the value of a variable at each iteration. You provide it with a name for the variable together with the variable itself. After the algorithm finished running you can all the variables you recorded, we will learn how to do that.

To run the algorithm, you would need to call TradingAlgorithm() that uses two arguments: initialize function and handle_data.  Then, call run method using data as an argument on which algorithm will run (data is panda data frame that stores the stocks prices)

run() first calls the initialize() function, and then streams the historical stock price day-by-day through handledata(). After each call to handledata() we instruct Zipline to order 10 stocks of AAPL.

How to code Moving average crossover strategy with Zipline in Python

It is the simple average of a security over a defined number of time periods.

Now we will learn how to implement this strategy using Zipline in Python. To import libraries and initialize variables that will be used in the algorithm.

The code is divided into 5 parts

loadbarsfrom_yahoo() is the function that takes stock and time period for which you want to fetch the data. Here I am using SPY stocks between 2011 to 2012, you can change this according to you.

Now we would define initialize function, context.security represents the stock that we are dealing with, in our case its SPY.

handle_data() contains all the operation we want to do, the main code for our algorithm. we need to calculate moving averages for different windows, Zipline gives an inbuilt function mavg() that takes an integer to define the window size.

Also, Zipline automatically calculates currentprice, portfoliovalue etc. we can just call the variables, in this algorithm, I have calculated currentpositions, price, cash, portfoliovalue, and the PnL.

Now the logic that will place the order for buy or sell depending upon the condition that compares moving averages.

For running this algorithm, you need the following code:

You can plot the graph also using method plot()

Graph for the strategy 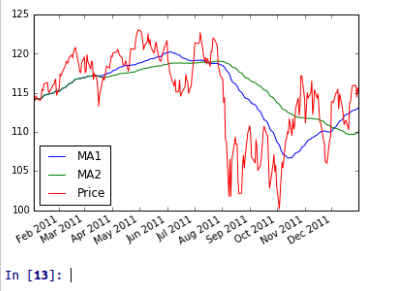 Snapshot of the screen using Zipline 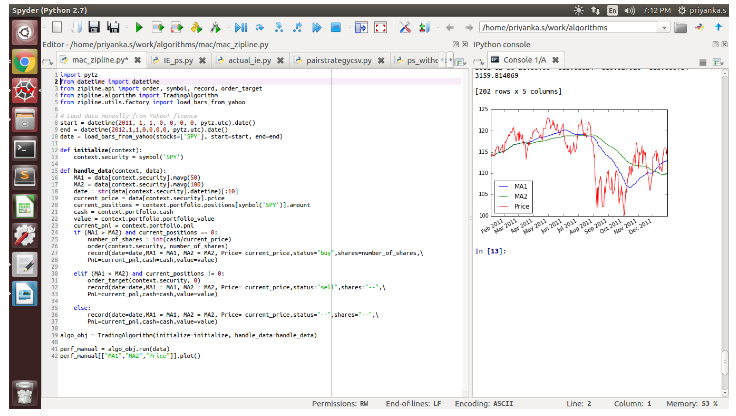 We hope that you found this introduction to zipline in Python and implementing a strategy using the same useful. In our next article, we will show you how to import and backtest data in CSV format using Zipline. For building technical indicators using python, here are few examples.

Learn importing and backtesting on Zipline using data from Google and OHLC data in CSV format. Calculate backtesting results such as PnL, number of trades, etc in our post 'Importing CSV Data in Zipline for Backtesting'.

What Makes Python Most Preferred Language For Algorithmic Traders