By Chainika Thakar and Danish Khajuria

A technical Indicator is essentially a mathematical representation based on data sets such as price (high, low, open, close, etc.) or volume of security to forecast price trends.

There are several kinds of technical indicators that are used to analyse and detect the direction of movement of the price. For instance, momentum trading, mean reversion strategy etc. Traders use indicators usually to predict future price levels while trading.

Let us find out how to build technical indicators using Python with this blog that covers:

What are technical indicators?

Technical Indicators do not follow a general pattern, meaning, they behave differently with every security. What can be a good indicator for a particular security, might not hold the case for the other. Thus, using a technical indicator requires jurisprudence coupled with good experience.

As these analyses can be done in Python, a snippet of code is also inserted along with the description of the indicators. Sample charts with examples are also appended for clarity. We have also previously covered the most popular blogs for trading, you can check it out Top Blogs on Python for Trading.

Why use Python technical indicators?

Technical indicators are a set of tools applied to a trading chart to help make the market analysis clearer for the traders.

Also, indicators can provide specific market information such as when an asset is overbought or oversold in a range, and due for a reversal.

Now, let us see the Python technical indicators used for trading. There are a lot of indicators that can be used, but we have shortlisted the ones most commonly used in the trading domain. Also, the indicators’ usage is shown with Python to make it convenient for the user.

Here is the list of Python technical indicators, which goes as follows:

Moving average, also called Rolling average, is simply the mean or average of the specified data field for a given set of consecutive periods. As new data becomes available, the mean of the data is computed by dropping the oldest value and adding the latest one.

So, in essence, the mean or average is rolling along with the data, hence the name ‘Moving Average’.

Also, moving average is a technical indicator which is commonly used with time-series data to smoothen the short-term fluctuations and reduce the temporary variation in data.

There are three popular types of moving averages available to analyse the market data:

Let us see the working of the Moving average indicator with Python code:

As the volatility of the stock prices changes, the gap between the bands also changes. During more volatile markets the gap widens and amid low volatility conditions, the gap contracts.

As with most technical indicators, values for the look-back period and the number of standard deviations can be modified to fit the characteristics of a particular asset or trading style.

Let us find out the Bollinger Bands with Python as shown below:

The image above shows the plot of Bollinger Bands with the plot of the close price of Google stock.

Relative strength index (RSI) is a momentum oscillator to indicate overbought and oversold conditions in the market. It oscillates between 0 and 100 and its values are below a certain level.

Usually, if the RSI line goes below 30, it indicates an oversold market whereas the RSI going above 70 indicates overbought conditions. Typically, a lookback period of 14 days is considered for its calculation and can be changed to fit the characteristics of a particular asset or trading style.

We can also calculate the RSI with the help of Python code. Let us see how.

In the output above, we have the close price of Apple over a period of time and the RSI indicator shows a 14 days RSI plot.

The Money Flow Index (MFI) is the momentum indicator that is used to measure the inflow and outflow of money over a particular time period.

MFI is calculated by accumulating the positive and negative Money Flow values and then it creates the money ratio.

Let us find out the calculation of the MFI indicator in Python with the codes below:

The output shows the chart with the close price of the stock (Apple) and Money Flow Index (MFI) indicator’s result. You must see two observations in the output above:

But, it is also important to note that, oversold/overbought levels are generally not enough of the reasons to buy/sell. The trader must consider some other technical indicators as well to confirm the asset’s position in the market.

This fact holds true especially during the strong trends.

The Average True Range (ATR) is a technical indicator that measures the volatility of the financial market by decomposing the entire range of the price of a stock or asset for a particular period.

Let us see the ATR calculation in Python code below:

The above two graphs show the Apple stock's close price and ATR value.

The ATR is a moving average, generally using 14 days of the true ranges.

Each of these three factors plays an important role in the determination of the force index. For example, a big advance in prices, which is given by the extent of the price movement, shows a strong buying pressure. A big decline in heavy volume indicates strong selling pressure.

The Force Index for the 15-day period is an exponential moving average of the 1-period Force Index.

Let us now see how using Python, we can calculate the Force Index over the period of 13 days.

In the Python code below, we have taken the example of Apple as the stock and we have used the Series, diff, and the join functions to compute the Force Index. The Series function is used to form a series, a one-dimensional array-like object containing an array of data.

The diff function computes the difference between the current data point and the data point “n” periods/days apart. The join function joins a given series with a specified series/dataframe.

Ease of Movement (EMV) can be used to confirm a bullish or a bearish trend.

Apart from using it as a standalone indicator, Ease of Movement (EMV) is also used with other indicators in chart analysis.

Now, we will use the example of Apple to calculate the EMV over the period of 14 days with Python.

In the Python code below, we use the series, rolling mean, shift, and the join functions to compute the Ease of Movement (EMV) indicator.

The Series function is used to form a series, a one-dimensional array-like object containing an array of data. The rolling mean function takes a time series or a data frame along with the number of periods and computes the mean.

The shift function is used to fetch the previous day’s high and low prices. The join function joins a given series with a specified series/dataframe.

The above two graphs show the Apple stock's close price and EMV value.

You will find it very useful and knowledgeable to read through this curated compilation of some of our top blogs on:

Python technical indicators are quite useful for traders to predict future stock values. Every indicator is useful for a particular market condition. For example, the Average True Range (ATR) is most useful when the market is too volatile.

Hence, ATR helps measure volatility on the basis of which a trader can enter or exit the market.

Wondering how to use technical indicators to generate trading signals? You can learn all about in this course on building technical indicators. You will learn to identify trends in an underlying security price, how to implement strategies based on these indicators, live trade these strategies and analyse their performance. Check it out now!

Upgrading your skills from time to time is important, and a simple way to do so is by continuing to learn. Quantra is offering ALL of its courses and its much sought-after learning tracks at a massive 75% discount ONLY for the next few days. Explore the courses that you like and take free previews before you purchase, only at Quantra! 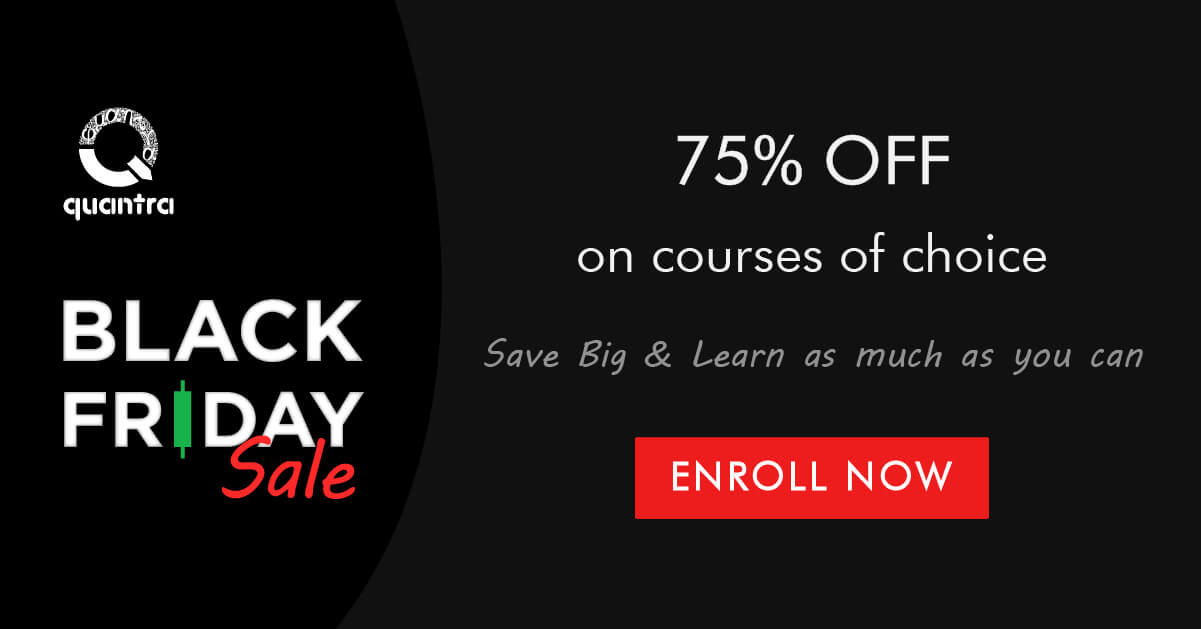 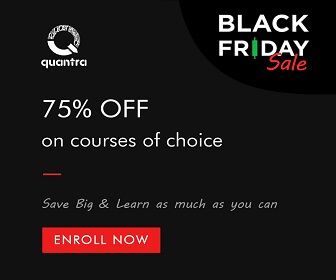