There are many seasonal edges and market anomalies that exist in financial markets despite what the efficient market hypothesis might suggest.

Normally, the tricky part is finding those anomalies and being able to profit from them before they are discovered and arbitraged out.

The Tax Day Trade, which was investigated by Stephen Moffitt, is another such edge that appears to still exist to this day.

The Tax Day Trade is a trading strategy that is based around the day in which federal income taxes are due in the US. It’s a one day trade whereby you enter the S&P 500 at the close on tax day and then sell it on the close one day later.

So this is a very simple trade to execute and one that relies on a simple behavioural bias.

Since 1980 the Tax Day Trade has returned around 0.5% each year. You can see that returns since 1980 are pretty consistent: 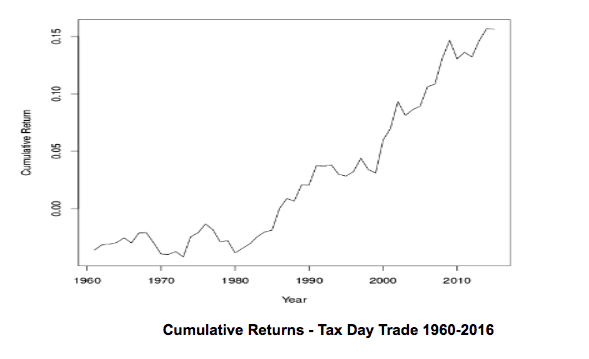 The most interesting part of the strategy is why there's an edge after 1980 and not before. Since 1980 the returns have been highly consistent. But before 1980, the results were far from attractive…

Why Is There An Edge?

To understand this, we have to look at the actual tax law and the changes that took place around that time to understand the basis for the edge.

There were two key developments around that time period that saw the tax and retirement landscape change in the US.

The Power Of The IRA

The law that was established in 1974 allowed some taxpayers to contribute to a tax-free individual retirement account (IRA) on or before the tax day deadline.

The changes in 1981 meant that IRA’s expanded to include all workers.

IRA’s are a powerful tool as they allow contributions that are free from tax.

Such accounts are supremely popular with the general public since they allow a significant reduction in taxes that would normally be paid to capital gains.

The edge in the market exists, therefore, because many people don’t want to pay their taxes until the last minute.

Either way, a great number of investors hold off until the last moment and then there is a rush to get their money invested into an IRA to save on taxes.

As a result, there is a consistent flow of money into US equity markets just when taxes are due to be lodged as taxpayers try to avoid paying taxes.

As shown by the analysis, buying S&P 500 futures on the close of the tax day and exiting on the close one day later has produced an average gain of 0.5% since 1980.

This strategy appears to be another seasonal edge that exists in financial markets that shows markets aren’t perfectly efficient.

Like all market anomalies, there is no guarantee that will it continue to work but it has been a consistent performer over the last 30 or so years.