This blog talks about how one can use technical indicators for predicting market movements and stock trends by using random forests, machine learning and technical analysis.

This article is the final project submitted by the author as a part of his coursework in Executive Programme in Algorithmic Trading (EPAT®) at QuantInsti®. Do check our EPAT Project works section and have a look at what our students are building. 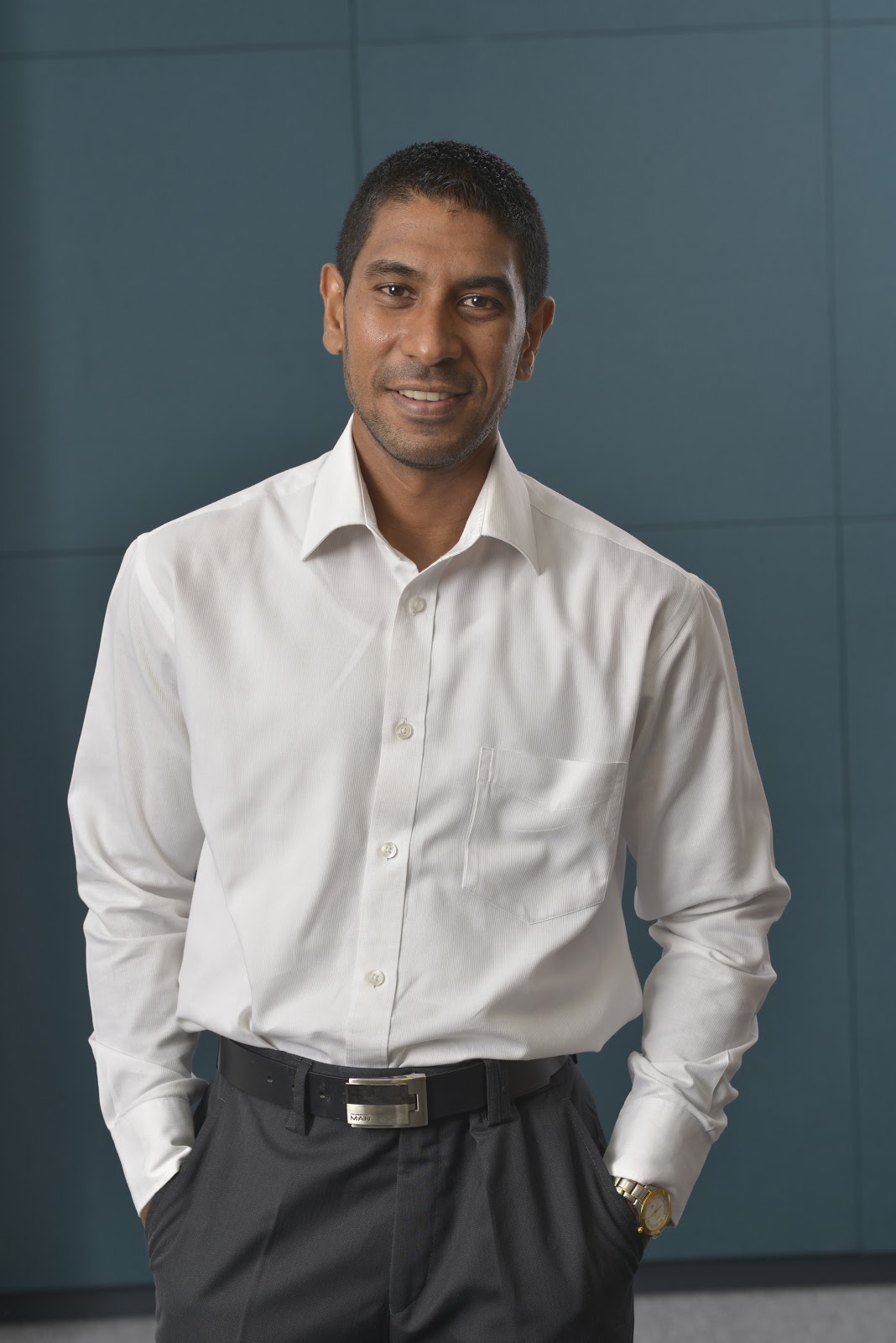 Desigan currently works on the dealing desk at Futuregrowth Asset Mangement as a Fixed Income Dealer in Cape Town, South Africa. Prior to joining FG in 2016, he had worked for several investment companies primarily in the market risk division spanning 12 years in the financial services industry (8 years in Risk and 4 years in investments and trading).

After graduating in 2005 with a BSc degree in Actuarial Science and Statistics, he completed his B.Sc. honours degree in Financial Mathematics (2006) and more recently his Masters (M.Com.) degree specializing in Finance and Risk Management in 2018. He is also a CFA charterholder and holds both the Financial Risk Management (FRM) and ACI Dealing certifications.

He enjoys coding and looking at ways to improve the investment process as well as coming up with trading ideas. On a more personal note, he is an ardent football and rugby follower and a huge Manchester United and Sharks supporter. He enjoys the outdoors and keeping active as well as going out to the movies.

This article looks at applying six common technical analysis indicators along with a machine learning algorithm to the top ten constituent stocks in the South African Top40 Index. The ten stocks analyzed were considered as our investment universe and were consequently used to construct an equally weighted index which served as our benchmark.

Our aim in this research note is to investigate whether using a machine learning model, identifying long-only trading opportunities, is able to produce a superior return than the constructed benchmark. In addition, we also compare the returns produced from our model to that of the more conventional technical indicators, namely: Bollinger Bands, RSI and MACD.

Using ten years’ worth of daily stock price data along with the resulting technical indicators, we utilized the first 7.5 years as training data in our Random Forest Classifier. This was done for each of the ten stocks considered and after fine-tuning the model hyper-parameters, the machine learning algorithm was applied to the last 2.5 years of test data to identify long-only investment opportunities.

Following the trade signals generated by the Random Forest Classifier, we looked at two long-only trading strategies. The one strategy looked at a daily rebalancing of our portfolio and the other weekly.

Our findings show that over the last 2.5 years (test data), both long-only trading strategies outperformed the constructed index (benchmark) as well as the traditional technical indicators.

There has been limited research done on the application of machine learning models in the South African market. Accordingly, this note aims to explore the improvement in using these models to determine stock trading signals. It is theorized that as an alternative to using common technical analysis indicators such as Bollinger Bands, RSI and MACD, one can enrich the trading decision process by incorporating these indicators into a machine learning algorithm (rather than using these indicators alone).

To test this hypothesis, we first construct an equally weighted index comprising of the top 10 stocks in the South African Top40 benchmark, i.e. each stock has a 10% weighting. The chosen stocks were considered as our investment universe with the constructed index serving as our benchmark.

After integrating six technical analysis indicators into our Random Forest Classifier model, we establish long only trade signals for each stock in our investment portfolio. It is postulated that by following an investment strategy using the signals generated by our model, one can outperform the constructed benchmark. In addition, it is also envisaged that the enriched machine learning model can also outperform the returns produced by the individual indicators as well.

The identified stocks along with their weights in the SA Top40 Index is shown in the table below.

Ten years (02/01/2009 – 31/12/2018) of daily data for each of the ten constituent stocks in our investment portfolio were obtained from www.investing.com. The attributes retrieved were as follows:

These features were then used as inputs in six technical analysis indicators, which were in turn used to identify long-only trading opportunities for each of the considered stocks in our investment portfolio (universe). The technical indicators chosen were broken down as follows:

In determining an investment strategy, we looked at two long-only trading methods. In addition, it was taken that when a signal was generated (by the Random Forest Classifier) for an individual stock, a fixed proportion of capital would be invested in that equity. In our work, we set this fixed proportion to 10% of the wealth. In principle that meant that each of the ten stocks in our investment portfolio had an equal weight of 10%. This was in line with the weights used in constructing our index (benchmark).

Results from the technical indicators (x-values: independent variables) along with the investment strategies signals (y-values: dependent variable) were then incorporated into a Random Forest machine learning model with the first seven and a half years of features used as the training dataset (02/01/2009 – 27/06/2016) and the last two and a half years as the test dataset (08/07/2016 – 31/12/2018).

The Hyper-Parameters for the Random Forest algorithm was then fine-tuned for each of the ten stocks in the respective strategies (i.e. daily and weekly rebalancing strategies which resulted in twenty models in total).

Following the signals generated by the machine learning algorithms, returns for each investment strategy was then measured against the returns produced by the constructed benchmark over the last two and a half years (test dataset). Further to this, we also compared our returns to the returns generated by three more common technical analysis indicators, namely: Bollinger Bands, RSI and MACD.

Results from our back-test show that our daily rebalancing strategy returned a commendable 44.69% over the two-and-a-half-year test period. This compared favourably to our constructed benchmark which only produced a return of 21.45% (outperformance of 23.24%). Interestingly over the same timeframe, we note that the Bollinger Band indicator produced a return of 7.26%, followed by RSI with 6.54%. The MACD indicator, however, resulted in a negative return of -10.35%. 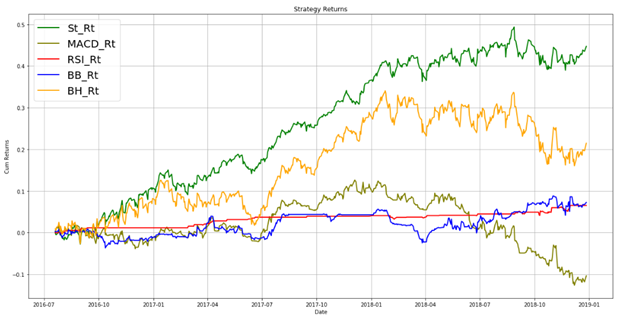 Given the notable outperformance from our Random Forest Classifier, we can deduce that in the context of the South African Market, there may be evidence of enhancing returns by applying a machine learning algorithm (such as the one used in this project) to more accurately predict the trend of a stock.

We also investigated the outperformance from the Random Forest Classifier for each of the stocks considered. Here we computed the returns from our model (which generated long only trade signals) and compared that to the Buy and Hold return for the individual stock.

Our results show that MTN produced the highest outperformance of 5.75%, followed by CFR with 3.37%. Also worth noting is that given the significant rally in the Naspers stock over the past several years, our machine learning model indicated a Buy and Hold recommendation for this stock which consequently resulted in a 0% outperformance for this particular equity. Other than Naspers though, all other stocks contributed positively to portfolio performance. 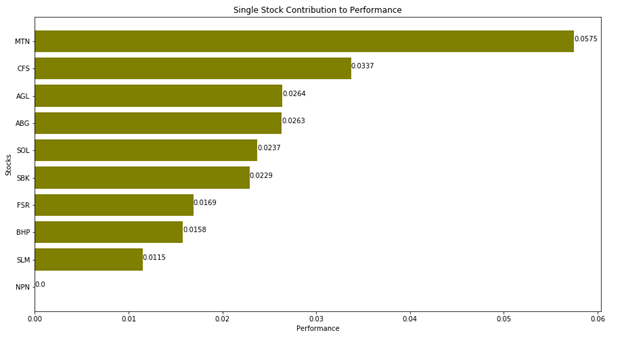 Similarly, our second strategy consisting of weekly rebalancing also produced a noteworthy return of 36.52%. This again compared favourably to the returns from our derived benchmark of 23.76% (outperformance of 12.66%). Furthermore, looking at the returns produced by our technical indicators, we note that the Bollinger Band indicator generated a return of 8.35%, followed by RSI with 1.02%. The MACD indicator once more resulted in a negative return of -14%. 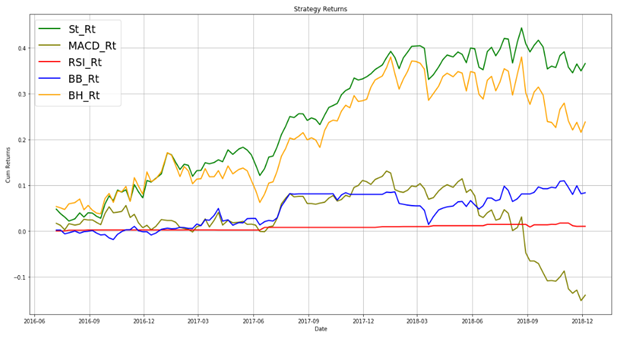 Results from this strategy provide further support that there may be potential to enhance returns by following a machine learning algorithm. In this project, a Random Forest Classifier was used to generate long only trade signals for individual stocks in a portfolio and accordingly it has been shown that the model followed was able to improve the timing of stock trades (i.e. purchases and sales).

Looking at the model performance for each of the stocks, we note that in the case of weekly rebalancing, MTN once more produced the highest outperformance of 9.42% followed by SOL with 3.09% and BHP with 1.47%.

Interesting, we also note that in this strategy ABG and AGL contributed negatively to portfolio returns with -0.84% and -2% respectively. 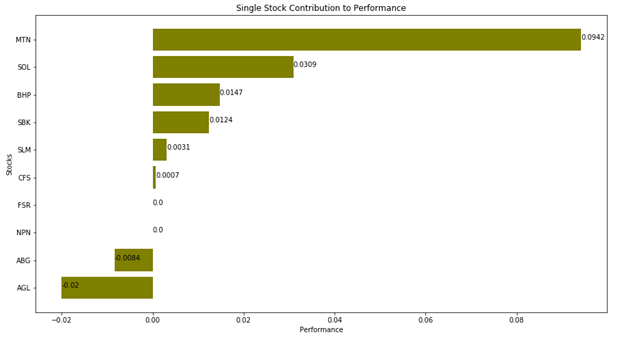 Results from our study have provided further support for the advances in machine learning models in stock trading. More specifically we have found evidence of enhanced returns by applying these models to the South African market.

We believe that our work can be enriched by investigating the application of these algorithms to other African or Emerging markets. It would be extremely interesting to see if these models provide any improvement in returns in these markets as well as in other asset classes (such as currencies, commodities and credit).

We hope that this article stimulates further research in this field, particularly in the South African context, and in doing so, helps promote the benefits of using machine learning algorithms in finance.

The below syntax is an example of the python code run for the ABG stock. The following code shows the process followed for the primary investment strategy (i.e. daily rebalancing). The steps followed can be broken down as follows:

Example of Python Code below - ABG Stock and Daily Data: 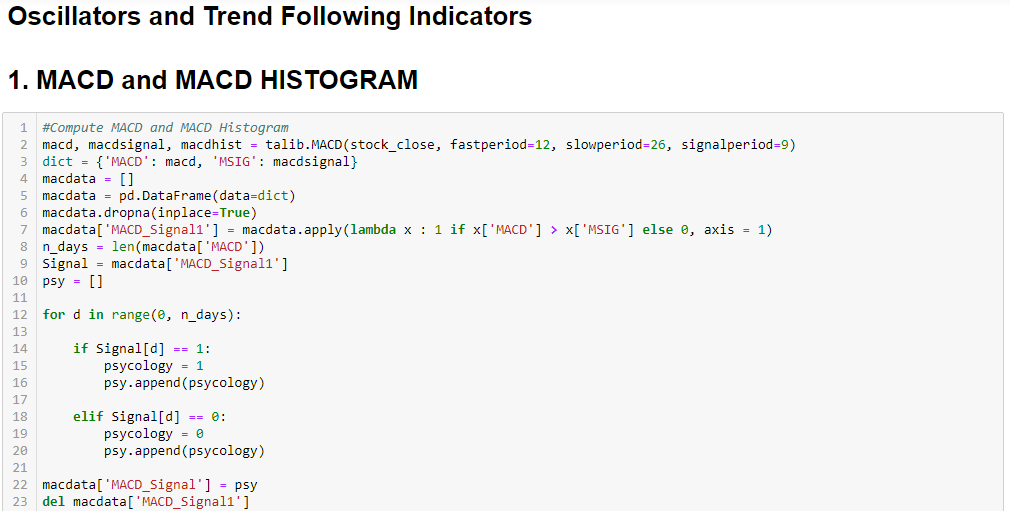 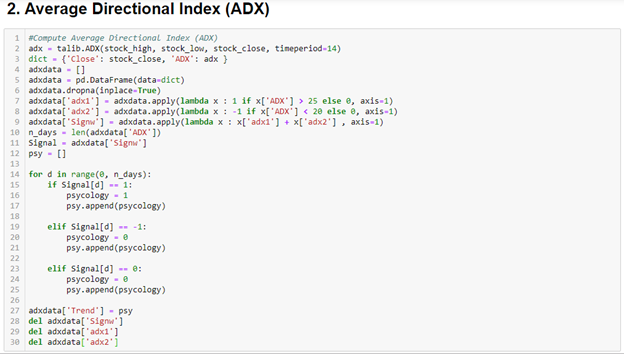 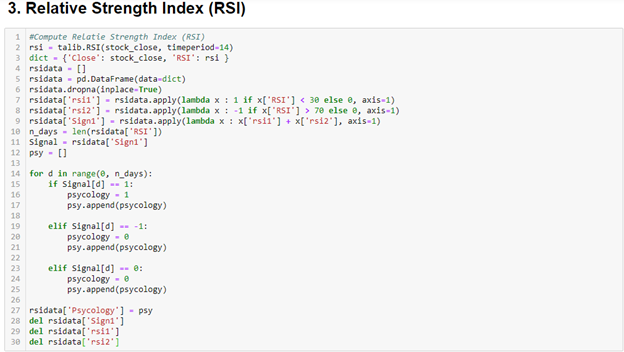 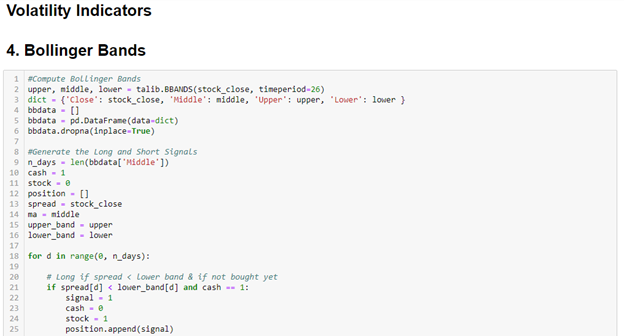 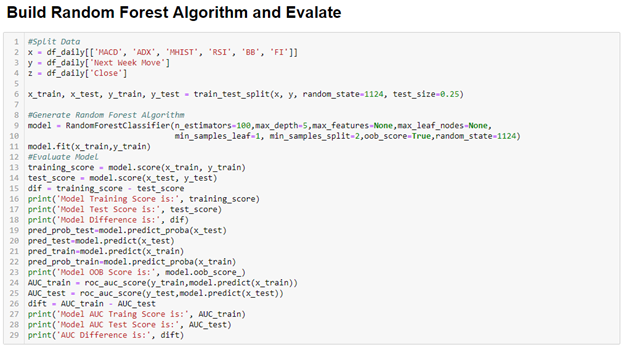 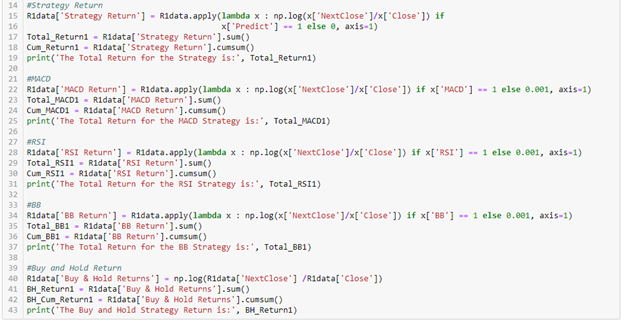 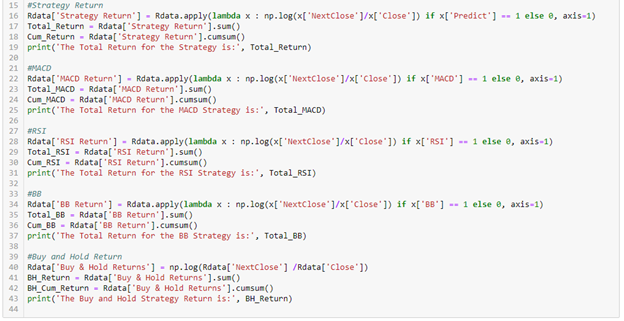 The same procedure is followed for the remaining nine stocks in our investment portfolio (universe). Similarly, this process is repeated for the weekly rebalancing strategy. In this case, the only difference is that weekly data points is used instead of daily.

Next, we assess the portfolio’s performance against that of the benchmark and the returns produced by three Technical Indicators (MACD, RSI and BB). In addition, we compute the contribution to portfolio performance for each stock in our investment portfolio. Again the python code used for the analysis is shown below: 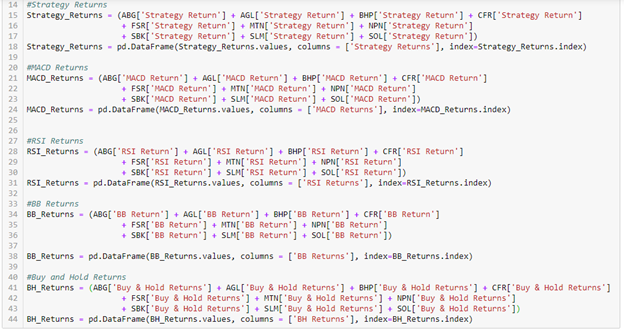 This concludes the project on how one can use technical indicators for predicting market movements and stock trends by using random forests, machine learning and technical analysis.