In the previous blog, we explored blockchain technology and its various components. Now, we delve further into a specific application of this technology which is probably the most well-known - Bitcoin. The Bitcoin blockchain has got everyone hooked to this technology.

We will discuss the components of the Bitcoin blockchain, the different exchanges that it is traded on, and look at a Bitcoin trading strategy in Python. So without further ado, let's get started!

We will be covering the following topics:

Once upon a time, in a trustless world of paper and plastic money and coins ruled by financial institutions, a blockchain named Bitcoin was born. It vowed to set the world free from the clutches of central power figures and make it a trust-free world where we could transact with strangers without the need for any trust.

Bitcoin is the most popular digital currency created by the mysterious person(s), Satoshi Nakamoto, in 2008, but it was not the first one. Ecash was created by David Chaum back in 1983, and hashcash was proposed in 1997 by Adam Back to counter spam-mail based on a proof-of-work scheme.

In 2004, Hal Finney further developed the hashcash into a reusable proof-of-work (RPOW), the first public implementation of a server designed to allow users throughout the world to verify its correctness and integrity in real-time.

The earlier proposals for distributed cryptocurrencies like bit gold by Nick Szabo (2005) and b-money by Wei Dei (1998) inspired the creation of Bitcoin. And the rest, as they say, is history.

Today exists the modern form of the Bitcoin blockchain, that owes it's present form to these events.

Each input refers to the previous transaction where the sender of this transaction received the coins. So each input will refer to an earlier transaction keeping track of each Bitcoin. This model is called the UTXO (Unspent Transaction Output) model.

Let us look at how the UTXO model works using this simplified diagram:

Bitcoin is a public blockchain. It means that anyone can join the Bitcoin network and view the entire Bitcoin blockchain. Some of these nodes may take up 'mining' by competing to 'mine' the blocks for a reward.

This is mainly to resolve the following issues:

The consensus protocol used by Bitcoin is the Proof-of-Work (POW). Simply put, to add a block to the blockchain, all nodes compete to solve a cryptographic puzzle. This puzzle is computationally extensive, and a lot of energy goes into solving it.

So all the nodes have to 'work' on it. It makes it difficult for an attacker to mimic multiple nodes because the cost of setting up another mining node is considerable.

The first node to solve the cryptographic puzzle gets to add the next block to the chain as it shows the 'answer' as its proof-of-work and is rewarded with some Bitcoins (coinbase transaction). In the case of two versions of the chain getting created due to two nodes mining a block simultaneously, the longest chain is selected as the valid chain.

Bitcoin Mining and Proof of Work

The Proof-of-Work (PoW) algorithm is designed so that one block is mined every 10 minutes. In order to ensure this time limit, the network sets a difficulty level for the puzzle.

Now each node has the hash of the previous block and the current block of transactions. They need to calculate the nonce (a number used only once), which generates a hash with the given number of leading zeroes when combined with the above values.

When one leading zero is added to the target hash, the work is doubled, increasing the problem's difficulty. The Bitcoin network automatically configures the problem so that it takes approximately ten minutes to mine each block.

The first miner who finds a valid nonce (golden nonce) is rewarded, and the nonce is broadcast to the network for validation. The block is added to the Bitcoin blockchain after verification.

Mining a block is computationally-expensive work, so sometimes a group of miners come together and form a mining pool to increase their chances of mining a block.

It is not mandatory for miners to pick up the transactions on a first-come-first-serve basis in the Bitcoin network. So the miners are free to choose the transaction they want to add to a block.

Note that a transaction becomes valid only once it is added to the blockchain. You can think of it as a simple money transfer transaction that remains in the processing stage unless the bank confirms it.

Nakamoto designed Bitcoin as a deflationary cryptocurrency. The logic behind this was that fiat currencies are in infinite supply as more and more money keeps getting added to the system by the central banks and governments, leading to a decrease in the value of money over time. This is inflation.

To counter this, Nakamoto capped the total number of Bitcoins that will be created at 21 million. So, like gold, Bitcoins supply will decrease over time and hence become scarcer, increasing their price.

After every 210,000 blocks are mined, the block reward is halved until it becomes nearly zero in 2140. It is currently 6.25 coins per block. As the block rewards continue to reduce, the transaction fees may be the primary incentive for miners.

Due to the rise in the popularity of cryptocurrency, Bitcoin is traded on many exchanges. Some decentralized exchanges even allow the users to remain pseudonymous, not asking them to reveal any personal information.

Some of the top exchanges where Bitcoin is traded are:

Bitcoin is a volatile market where there is always momentum. It makes sense to try out a momentum-based strategy in such markets.

We will build a momentum-based trading strategy for Bitcoin using the Awesome Oscillator (AO) technical indicator. AO calculates the difference between a short term (usually 5) and a long term (usually 34) Simple Moving Average.

This SMA is calculated using the mid-point of each bar instead of the closing prices. Here is the code for this strategy:

You can also use other technical indicators like the Ichimoku cloud to trade on Bitcoin. To know more about algorithmic Bitcoin trading, click here.

Diving into the world of blockchain technology, this blog in the series dealt with Bitcoin blockchain. We explored the history of Bitcoin, its various components, Bitcoin mining, and transaction fees. We also looked at a momentum trading strategy using the Awesome Oscillator technical indicator.

If you too wish to dive deeper into the world of cryptocurrencies and explore trading opportunities in Cryptocurrency, leverage your knowledge of blockchain, with Quantra's intermediate course on Crypto Trading Strategies. Enroll now! 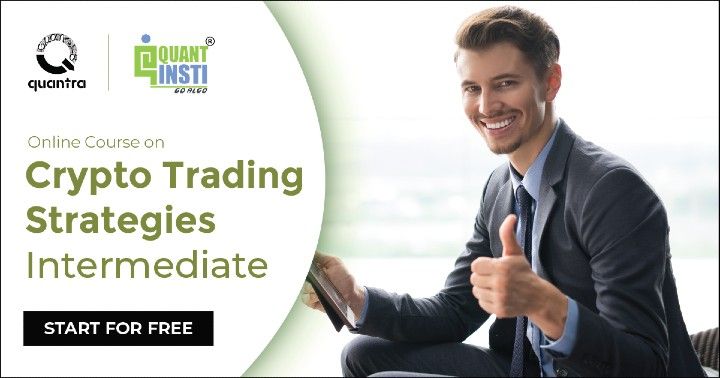 Bitcoin Basics: What it is, Crypto Trading, Bitcoin Algo Trading 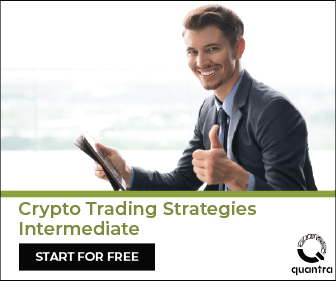