It’s been sometime since a ransomware called ‘Wannacry’ or ‘Wcry’ or ‘WNCRY’ is making headlines. If your computer shows nothing but this window then you’re in trouble. 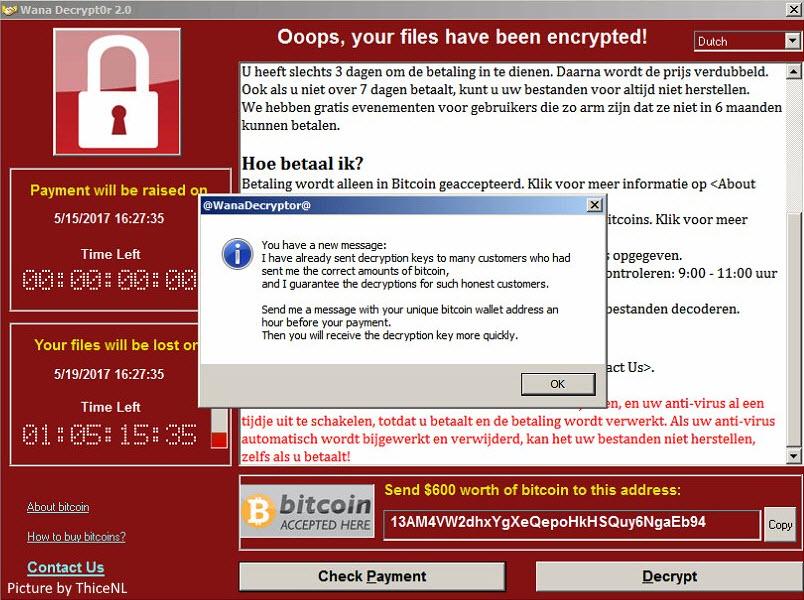 More than 200k computers in 175 countries [1] have been infected by Wannacry. This malware went viral like a cat chasing dog video.

This is a malware, a piece of code made by a group of people with not so good intentions, it takes control of your PC without your consent (of course!), then it encrypts all of your data and locks it down. Locked data can only be accessed with a key that these hackers have, so if you want to get back your data you have to pay them. Ransom is nothing new, villains in Bollywood have been doing this since ages, only this time it’s your data, not daughter.

However, the interesting thing to note here is that this ransomware doesn't require any action from the user to get itself activated and spread across networks. User actions are something like downloading an attachment, installing an unknown or pirated software, or visiting suspicious websites - that’s how traditional hackers have been exploiting dumb humans. The ‘Wannacry’ hackers were able to do this because of a vulnerability in Windows 7 (especially x64)[2] operating system. This vulnerability was discovered by NSA but wasn’t reported to Microsoft (for obvious reasons), but eventually it got leaked out and hackers took advantage of it.

Interesting stuff, but this is not the part we want to focus on. Our focus is on the payment part of this ransomware - Bitcoin. Hackers are only accepting payments in Bitcoins, but why? And how is it useful for you as a trader? This is going to be a long post, so why don’t you message your wife that you’re going to be late for dinner. Here it goes,

What is a Bitcoin?

Bitcoin is a first cryptocurrency that is decentralized, meaning one government or organization cannot control or regularize this, instead Bitcoin currency is managed by public.

In simple words, Bitcoin is just a number(like frequent flier miles) that is available in an online wallet which has a value associated with it(1 bitcoin = $2550 at the time of this writing), Bitcoins can be traded to other Bitcoin wallets which are free to get. Here is how a bitcoin wallet looks like: 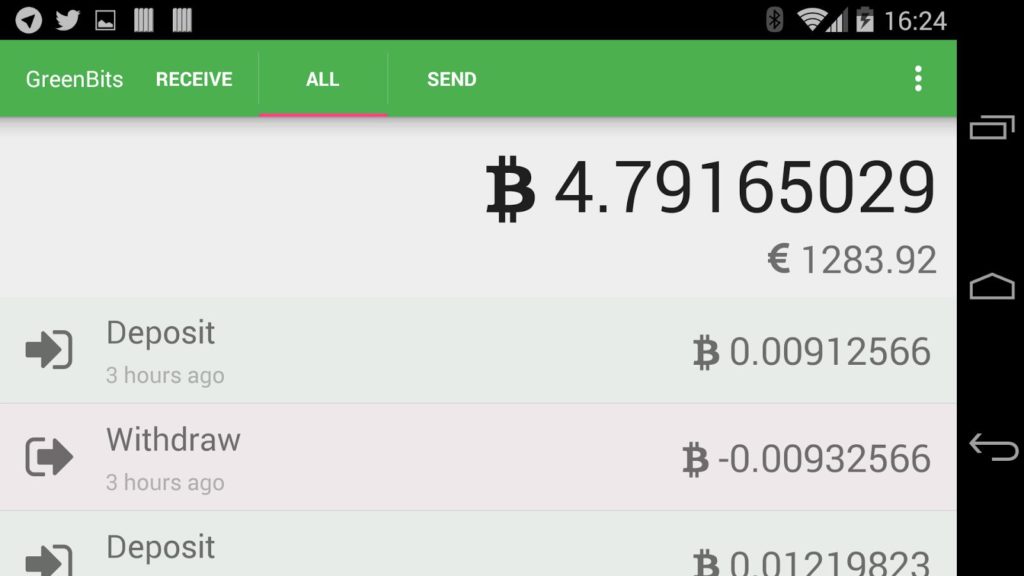 The transactions are recorded in an online ledger called as blockchain. The blockchain is a series of blocks and each block contains several transactions data which is public.

Now, this is the best part, instead of having one bookkeeper who maintains the ledger book and confirms the transaction for everyone (which is the case in all other financial institutes), in bitcoin, there are more than 150,000 bookkeepers, and each of them keeps an updated copy of the ledger. Having so many bookkeepers is what makes the Bitcoin so special, once a valid block is recognized by the system it is updated at all bookkeeper locations. So no one can tamper with ledger data. ‘Distributed ledger’ is what it is called. This ledger provides data of who owns what at any given point.

The bookkeepers here are called as miners, and as the name suggests they mine blocks by solving mathematical hashes based on input from existing latest block. These miners have super weird but powerful computers designed to do trillions of hash calculations per minute because the mathematical calculations are way difficult and there is a reason for it. Since there are so many bookkeepers, blockchain needs to have a mechanism which will make sure that records are kept in an organized manner and everyone has the same updated copy of ledger. So by making these miners do such hefty maths, the first one to get the correct result gets to announce his block as the official and the latest block in the chain (of course after making sure that he has all valid transactions in it). This way miners have to work hard to get their blocks into the blockchain.

But why would anyone in their right mind, would want to be a miner? Because whichever miner solves the correct calculations for the new block FIRST, gets a reward of 12.5 Bitcoins ($31875)(it was higher earlier) for adding that block; this basically says that successful miner has helped the community to maintain and grow the ledger book(blockchain), so here is your reward(go buy lemonades now). Once a new block is created everyone updates their blockchain and starts working towards solving the next block based on inputs from the newly created block. Average time required to create a block today is about 10 minutes (much quicker than waiting for days for settlements that current banks take for overseas transactions). 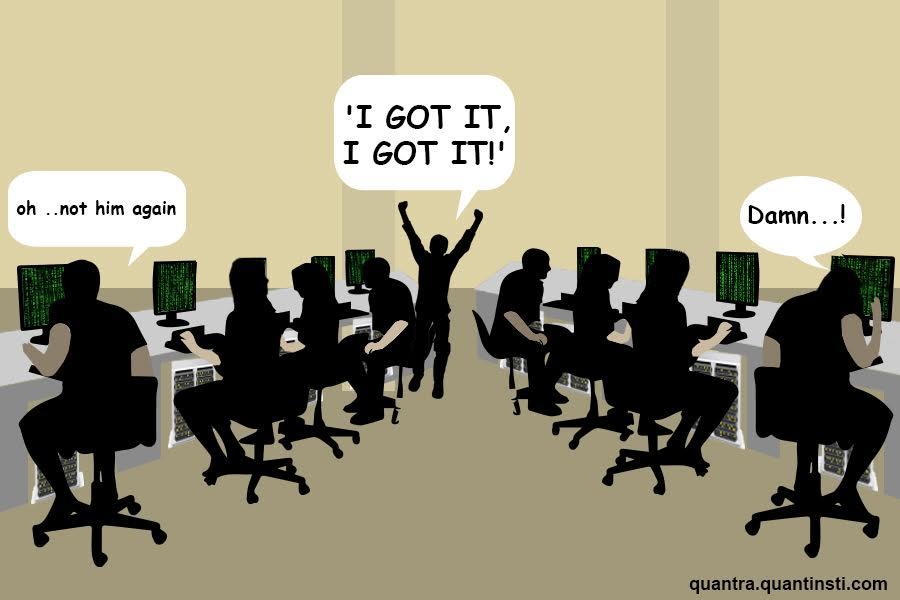 Here is how a block looks like, ignore the advertisement.

Once a block is official, it is permanent; no one can make any changes to it (not even the person who created that block) hence eliminating any possibility of ‘cooking the ledger book’. You can see the details of each transaction (632) under this block here; see the sample below

People from the various field have started to explore other application of Blockchain. Having information distributed to the public at the same time maintaining the privacy of the actual details can help many other business' land records, peer to peer applications like car renting and much more. Helping out to solve problems of mismanaged or badly recorded databases. You can read more about applications of blockchain here.

The developers of Bitcoin have limited the number of bitcoins that can be in circulation to only 21 million, currently 16.3 million bitcoins are in circulation. Why is that? Because no one (not even the creator of Bitcoin) should be able to impact the currency value by infusing more currency in the market at any point in time. New bitcoins are introduced by mining process and it will stop once it reaches 21 million in total circulation. After that, the miners can earn by charging customers a nominal transaction fee, currently it is 0.0001 bitcoin per transaction, this varies depending on the exchange.

I hope this has given you a basic idea of what Bitcoin is and how it operates. If you still have more questions, you can ask me in the comment section below or have a look at this FAQs list.

Anonymity! even though all the transactions are public, you can’t see the owner’s details of any address (even the companies who provide wallet services). In traditional banks, it is possible (however difficult) to find out where the money is being routed by the hackers, here is such a case of previous ransomware hackers who were shut down. Now, let’s have a look at what makes Bitcoins a great instrument for trading.

Why is Bitcoin a better tradable instrument?

(i) No one can manipulate this currency

That’s right! Unlike Government issued money, that can be inflated at will, the supply of Bitcoin is mathematically limited to twenty-one million bitcoins, and that can never be changed. The only thing that defines the value of bitcoin is its demand(not supply). And given the fact that the supply is limited, personally, I think the value of bitcoin will only appreciate in future.

(ii) Bitcoins are impossible to counterfeit or inflate

Unlike paper currency, bitcoin cannot be counterfeited. This is because of the blockchain, blockchain knows which bitcoin belongs to which account and this data is public, so even if you try to submit a falsified transaction to the blockchain, it will reject your block. However, bitcoins can be stolen, that is if you’re careless with your private keys. If someone gets access to your private keys and then transfers your bitcoin to his/her wallet, you’re done; even if you prove that it was a robbery, no one can go back and disqualify the transaction as the blockchain cannot be edited by anyone.

(iii) You can use them to send or receive any amount of money, with anyone, anywhere in the world, at very low cost.

This is what makes Bitcoins a lucrative appeal and warrants that people will continue to transact in bitcoin unless a similar better option becomes available. In Bitcoins, payments are impossible to block, and bitcoin wallets can’t be frozen. Short of turning off the entire world's internet, and keeping it turned off, the Bitcoin network is unstoppable and uncensorable.

All these reasons make Bitcoins an ideal case for investing.

How to trade Bitcoins?

Since there is no authority that can control Bitcoin, so things like interest rates, inflation, currency infusion won’t affect the value of bitcoin. What will affect is just supply and demand, but since the supply of bitcoin is also predefined, what we are left with is just demand. And there are several factors that will affect the demand of Bitcoin.

These are some of the scenarios where the demand can either go up or down.

Bitcoins will rise in value every time there is a surge in its popularity, given that Bitcoin is new and the concept is slightly complicated, people misunderstand it and often have doubts. But as they understand the fundamental differences and value proposition of Bitcoin the demand will surge.

If ever and probably there will be another cryptocurrency which will offer better features than bitcoin and it might become more widely accepted. In such scenario, the demand for bitcoin will decline along with its value.

Governments do have an option to ban bitcoin in their respective countries. For example, Chinese central bank banned trading of bitcoins for financial firms in Dec 2013[4] Bitcoin’s value dropped post this news. We can expect similar events in future given how our governments become insecure, duh! but in the long run the value should appreciate only.

In Feb 2014, a group of hackers initiated a DDoS attack[5] on a major bitcoin exchange which led to a temporary stoppage in bitcoin trading. The news broke and the value of bitcoin started dropping, next couple of days saw over 10% drop in price. However, this was back in 2014, today number of exchanges have grown and this reduces the vulnerability of such attacks.

This graph shows Bitcoin’s value in US dollar since its inception. [6]

At the time of writing this article, the bitcoin’s value against USD is the highest at $2550 per bitcoin. I also want you to have a look at the Google trends report on interest in bitcoins since 2009. There is a direct correlation between people talking about bitcoin and its value.

Popularity can be an easy indicator for predicting the demand for bitcoins, as long as there is no negative news. If this graph is steadily rising we can expect the demand and value of bitcoin to rise as well.

Bitcoin is a very volatile instrument to trade, experts often recommend to stay away from short term trading since it can easily trigger margin calls. However, if you keep investment horizon of long term, you can expect good returns.

In my opinion, cryptocurrencies are the future, whether it is a bitcoin or something else. Sure, no one likes losing control over things, especially governments and that too for something as valuable as currency. There will be ugly situations where governments will try to get back their control but in the long run, decentralized currencies will bring in a lot of improvements to our financial system and our lives.

How Will Blockchain Change Stock Markets?