“It would be like a pupil who had learnt much from his master but had added much more by his own work. When this happens I feel that one is obliged to regard the machine as showing intelligence."

To give you an example of the impact of machine learning, Man group’s AHL Dimension programme is a $5.1 billion dollar hedge fund which is partially managed by AI. After it started off, by the year 2015, its machine learning algorithms were contributing more than half of the profits of the fund even though the assets under its management were far less.

Initially developed in statistics to study the relationship between input and output numerical variables, it was adopted by the machine learning community to make predictions based on the linear regression equation.

The equation mentioned below represents a linear regression model with two sets of input values, x1 and x2. y represents the output of the model, β0, β1 and β2 are the coefficients of the linear equation. 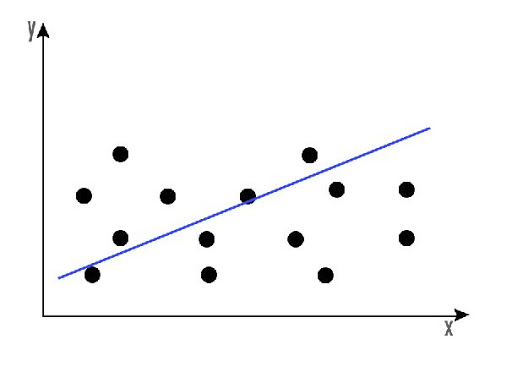 Linear regression can be used to find the general price trend of a stock over a period of time. This helps us understand if the price movement is positive or negative.

In logistic regression, our aim is to produce a discrete value, either 1 or 0. This helps us in finding a definite answer to our scenario.

Logistic regression can be mathematically represented as,

The logistic regression model computes a weighted sum of the input variables similar to the linear regression, but it runs the result through a special non-linear function, the logistic function or sigmoid function to produce the output y. 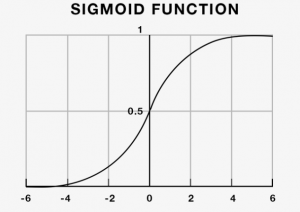 In simple terms, logistic regression can be used to predict the direction of the market.

The purpose of the K nearest neighbours (KNN) classification is to separate the data points into different classes so that we can classify them based on similarity measures (e.g. distance function).

KNN learns as it goes, in the sense, it does not need an explicit training phase and starts classifying the data points decided by a majority vote of its neighbours.

The object is assigned to the class which is most common among its k nearest neighbours. 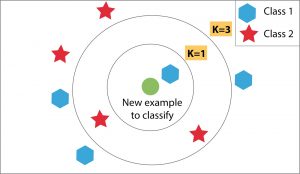 Support Vector Machine was initially used for data analysis. Initially, a set of training examples is fed into the SVM algorithm, belonging to one or the other category. The algorithm then builds a model that starts assigning new data to one of the categories that it has learned in the training phase.

In the SVM algorithm, a hyperplane is created which serves as a demarcation between the categories. When the SVM algorithm processes a new data point and depending on the side on which it appears it will be classified into one of the classes. 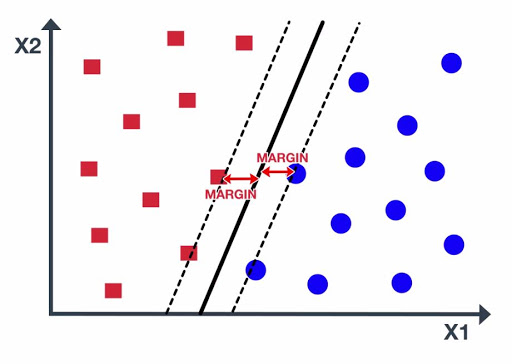 When related to trading, an SVM algorithm can be built which categorises the equity data as a favourable buy, sell or neutral classes and then classifies the test data according to the rules.

Decision trees are basically a tree-like support tool which can be used to represent a cause and its effect. Since one cause can have multiple effects, we list them down (quite like a tree with its branches).

We can build the decision tree by organising the input data and predictor variables, and according to some criteria that we will specify.

The main steps to build a decision tree are:

The disadvantage of decision trees is that they are prone to overfitting due to their inherent design structure.

A random forest algorithm was designed to address some of the limitations of decision trees.

Random Forest comprises of decision trees which are graphs of decisions representing their course of action or statistical probability. These multiple trees are mapped to a single tree which is called Classification and Regression (CART) Model.

To classify an object based on its attributes, each tree gives a classification which is said to “vote” for that class. The forest then chooses the classification with the greatest number of votes. For regression, it considers the average of the outputs of different trees. 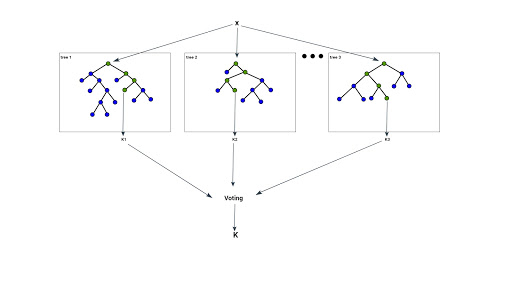 In our quest to play God, an artificial neural network is one of our crowning achievements. We have created multiple nodes which are interconnected to each other, as shown in the image, which mimics the neurons in our brain. In simple terms, each neuron takes in information through another neuron, performs work on it, and transfers it to another neuron as output. 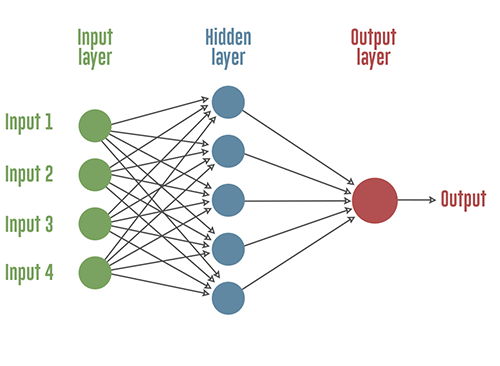 Each circular node represents an artificial neuron and an arrow represents a connection from the output of one neuron to the input of another.

Neural networks can be more useful if we use it to find interdependencies between various asset classes, rather than trying to predict a buy or sell choice.

In this machine learning algorithm, the goal is to label the data points according to their similarity. Thus, we do not define the clusters prior to the algorithm but instead, the algorithm finds these clusters as it goes forward.

A simple example would be that given the data of football players, we will use K-means clustering and label them according to their similarity. Thus, these clusters could be based on the strikers preference to score on free kicks or successful tackles, even when the algorithm is not given pre-defined labels to start with.

K-means clustering would be beneficial to traders who feel that there might be similarities between different assets which cannot be seen on the surface.

Now, if you remember basic probability, you would know that Bayes theorem was formulated in a way where we assume we have prior knowledge of any event that related to the former event.

For example, to check the probability that you will be late to the office, one would like to know if you face any traffic on the way.

However, Naive Bayes classifier algorithm assumes that two events are independent of each other and thus, this simplifies the calculations to a large extent. Initially thought of nothing more than an academic exercise, Naive Bayes has shown that it works remarkably well in the real world as well.

Naive Bayes algorithm can be used to find simple relationships between different parameters without having complete data.

Did you know Siri and Google Assistant use RNN in their programming? RNNs are essentially a type of neural network which have a memory attached to each node which makes it easy to process sequential data i.e. one data unit is dependent on the previous one. 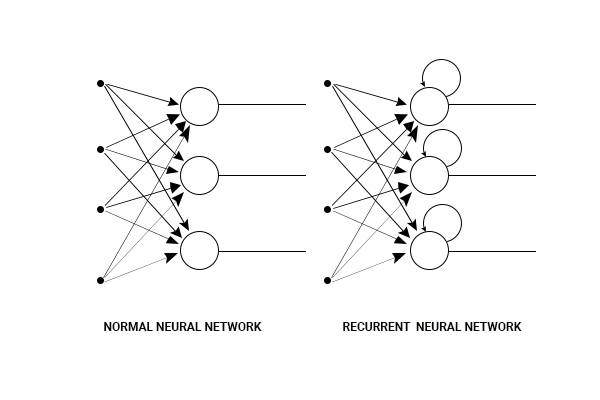 According to a study by Preqin, 1,360 quantitative funds are known to use computer models in their trading process, representing 9% of all funds. Firms organise cash prizes for an individual's machine learning strategy if it makes money in the test phase and in fact, invest their own money and take it in the live trading phase. Thus, in the race to be one step ahead of the competition, everyone, be it billion dollar hedge funds or the individual trade, all are trying to understand and implement machine learning in their trading strategies.

You can go through the AI in Trading course on Quantra to learn these algorithms in detail as well as apply them in live markets successfully and efficiently.

You can enroll for the online machine learning course on Quantra which covers classification algorithms, performance measures in machine learning, hyper-parameters, and building of supervised classifiers. 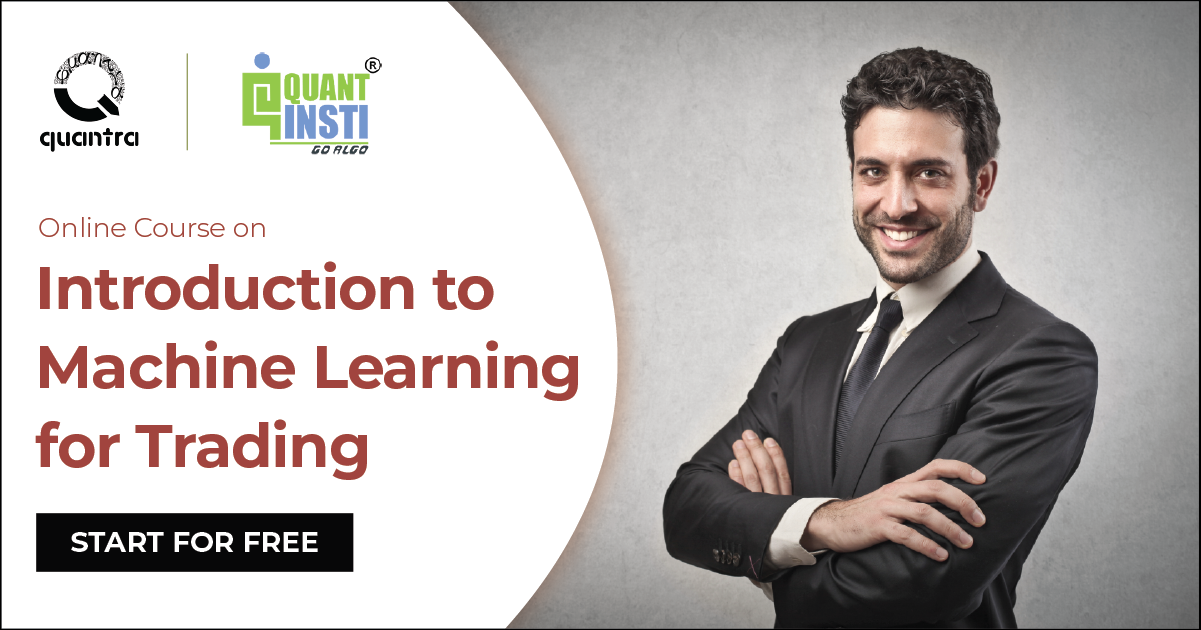