FIX (Financial Information eXchange) protocol is the defacto standard for message communication for almost two decades of electronic trading. In 1992, Salamon brothers and Fidelity Investments initiated FIX protocol to be used in equity trading. Today, it is used by a variety of market participants, firms, and vendors. With the advent of electronic trading, various exchanges and firms devised their own messaging formats, and so FIX was seen and developed as an intermediary messaging format, a common underlying means of standardized communications.

Pre-trade, on trade and post-trade processes have over the decades changed distinguishably, and even more so for different market participants and firms. The automation of processes demanded an automation of communication in general, and a standardized format of messages.

Widespread use of a standard messaging protocol reduces cost and complexity of integrating various internal processes, hence beneficial to all stakeholders. There is a vast improvement in the ease of maintaining application working over FIX than one that uses a proprietary protocol. The use of FIX reduces the costs of establishing a trading platform, automated execution tool, etc. simply by allowing replication from existing implementations.

If three people are having a conversation, it makes sense for them to use the language common to all three, the same analogy can be applied to message interaction between different market participants and stakeholders. With FIX as a standard, it is easier to involve multiple partners as one avoids the added complexity of using proprietary protocols to deal with multiple firms/exchanges. 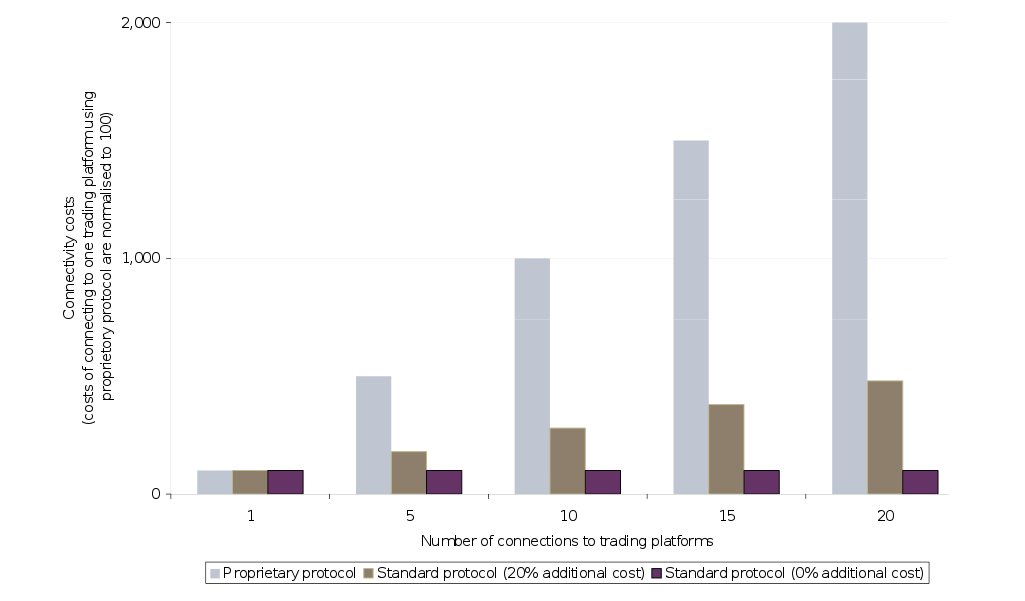 FIX is a well tested, widely used protocol. The reliability of FIX is hence guaranteed. FIX Protocol Ltd, is the organization owning the rights and looking into the issuing of the FIX standard.

Investment management firms will be able to switch more easily between brokers due to the availability of a common standard protocol. Thereby, increasing competition among brokers for trading services; resulting in increased quality of service.

Needless to say, the benefits compound when more firms use the same messaging protocol.

On 23rd Nov, 2015 FIX Trading community opened its technical standards process to developers in the financial industry. The interface is hosted on Github . Several FIX projects have already been published to Github and more are on the way.

With the advent of 'Transport Independence' multiple application messages can be carried over via one signal. This allows FIX messages to be used over any suitable transport technology from a message queue, buses etc.

FIX is layered over a TCP connection. A FIX message has tag value pairs; each pair being separated with a ASCII character code SOH (0x001), a tag separated from a value with an equality character (=). Every message has a header, a body and a tail. The tail is the checksum with the tag 10. The fix version and body length of the message are in the header part (8 and 9 tags respectively). The message type is denoted by the value of tag 35.